The Congressional Budget office has released data detailing the change in income, share of income, and tax liability across incomes from 1979 to 2005. It paints the same picture that has been emerging in other data sets for years: the income gap between those that are the highest income earners and those that aren't is growing wider.

I made some figures from the data that they have available. This first figure lists the share of total income accrued by groups of income earners. The data is broken up into quintiles; that is, the bottom 20% is the lowest quintile, the people who accrue on average between 20% and 40% the total share of income per year are in the second quintile, and so on. Of course, the quintile to keep an eye on is the highest quintile, which represent the wealthiest 20% of our country. 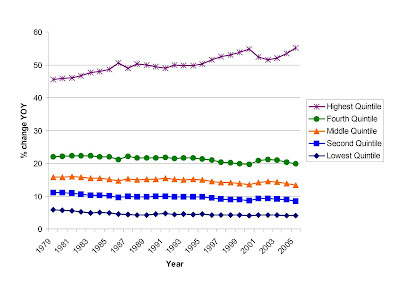 These trends are even better illustrated in this figure: 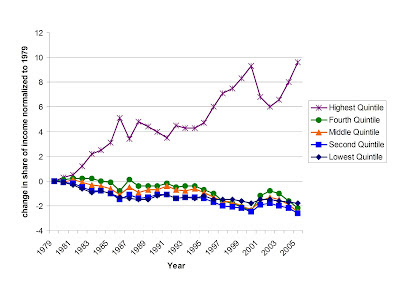 The bottom 80% all show the same trend: an equal loss in share of income. For the top 20%, there is an increase. Clearly tax cuts directed to the top earners is having its desired effect. The amazing thing is that the share for each of the bottom quintiles has decreased by about the same amount. So it's not like it's just the poorest of the poor are getting squeezed. Instead, anyone who is not rich is getting screwed equally, including the middle class.

Mathew Yglesias has some information on this here, and Kevin Drum expresses his jealousy for not getting a cool looking figure up fast enough here.

The CBO also has data breaking down the top quintile into finer categories. I'll be looking at those data a little more closely later today.
Posted by Afferent Input at 9:28 AM