Last week John McCain was asked just how many houses he and wife own. This may seem like a simple question to answer. For instance, if someone were to ask me how many houses I own, I would reply very quickly with:

McCain, on the other hand, had this to say when asked such a simple question:

"I think — I'll have my staff get to you," McCain told Politico in Las Cruces, N.M. "It's condominiums where — I'll have them get to you."

Is McCain an out-of-touch elitist who is so f-ing rich he doesn't even know how many homes his family owns? This may seem like the case, but only if you are completely ignorant of the demons that haunt McCain day-in and day-out. McCain's campaign was alluding to this affliction when asked to respond to the fact that McCain has no idea how many homes he owns. His campaign spokesman, Brian Rogers, had this to say:

“This is a guy who lived in one house for five and a half years — in prison.”

This may seem like McCain is, yet again, pulling out the ole "Noun, Verb, POW" card to shield himself from any criticism over any subject. But this is simply not the case. Instead, McCain suffers from PTCRHMHIOD, or Post Traumatic Can't Remember How Many Houses I Own Disorder. This horrible condition has forever altered the lives of countless Vietnam Vets, and especially former POWs, after their return to the States. In fact, it is the number one cause of divorce between former POWs and their millionaire liquor-heiress wives.

It is a shame that Democrats, and especially the Obama Campaign, will exploit McCain's ailment just to win an election. Obviously they will trivialize the service of any and all former military men-turned-politicians that use any suffering they endured while serving to deflect criticism of any kind, even it's about how much f-ing money they have.

Dems should be ashamed. Leave this honorable man and his four seven ten twelve houses alone!
Posted by Afferent Input at 5:54 AM No comments:

Or is it Houses-Gate? The question of the day is:

HOW MANY HOUSES DOES JOHN McCAIN OWN?

Honestly, you might think this would be an easy question to answer. At least for regular folks. For instance, I own exactly zero homes. Just like most of the people I know.

I do know one guy who's a lawyer and does very, very well. He also owns some investment properties. If I were to ask him how many homes he owns, this is how the conversation would go:

Me: Hey, how many homes do you own?

Him: 4, my house and three other that I rent.

Him: How many you own?

Me: None. You know that; I make jack shit as a scientist.

Yet here's what John McCain said when asked the same question:

"I think — I'll have my staff get to you," McCain told Politico in Las Cruces, N.M. "It's condominiums where — I'll have them get to you."

Anyway, the DNC has put together a helpful guide to let McCain know just how many homes he owns: 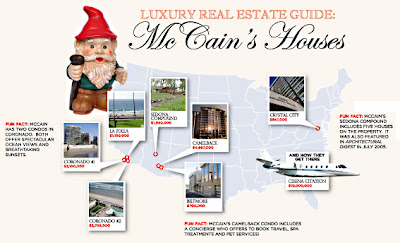 Must be nice to be so f-ing rich that you don't even know how many homes you own...

Posted by Afferent Input at 1:43 PM No comments: