Jesus Christ, I'm so glad I'm not there to watch this BS on a regular basis...

Wake me when the stoopid season ends...
Posted by Afferent Input at 1:17 PM No comments:

Ricahrd Cohen is an idiot

McCain's true virtue is that he is a lousy politician. He is not a convincing liar, and when he adopts positions that are not his own, they infect him, sapping him of what might be called integrity energy.

I think the best response I've seen for this vapidity is this from the comment section at Yglesias's place from Tim Conner:

You know, to take Richard Cohen seriously, you would have to think he was an honest man.

Like McCain, he is not. You see, to be honest, it's not enought to be uncomfortable with lying. You have to tell the truth when it's inconvenient.

At least, that's what my mom told me when I was little.

How Cohen can look at McCain's flip-floppery and see something honorable completely escapes me. McCain's a douchebag for flushing his integrity down the toilet; Cohen is even for worse respecting it.

Posted by Afferent Input at 6:38 AM No comments:

We went to the Obama rally last Thursday. I don't have time to give a recap, and it's already old news anyway. But Mrs AI gave a nice recap here, and check out this video a friend took of baby AI getting on gettin' on with a good ol' "Go Obama Go" chant and finishing it off with a classic terrorist fist jab. He's such a cute little terrorist.


Posted by Afferent Input at 2:36 PM No comments:

I said halb Kilo of Cherries!

I went to the local farmer's stand today to get some produce. It's a little weird here; you don't get to pick your produce. Instead, you stand in line and wait your turn to talk to some guy to let him know what you want. Then he puts your produce in a bag and then you pay.

So I wanted funf Apfel und vier Pfirsiche (five apples and four peaches) and ein halb Kilo Kirschen (half a kilogram of cherries). The guy put my apples and peaches in the basket, and then piled the cherries into a paper bag. He gave me my basket and I walked into the store to pay.

When I got up to the counter, I noticed that I had TWO paper bags of produce in addition to my plastic bags of apples and peaches. Both bags had stickers that said the they had about 1/2 a kilo each. I figured that the guy outside gave me two bags of cherries, or one 1/2 kilo too many. I started to tell the guy, using my 100-word vocabulary of German, that I only wanted 1/2 a kilo of cherries. And he looked at the bags and said "OK, you want half kilo, you have half kilo." I kept pointing to the bags as saying, "No I only want ONE 1/2 kilo", and he kept saying "yeah, you get one half kilo" but kept trying to make me pay for both bags. I finally gave up, figuring these guys were trying to take advantage of the dumb American who can't speak German, sticking him with some extra cherries like some dumb schmuck!

Anyway, I got home and was pretty steamed. I told Mrs AI about what happened, and she was pissed that I paid for both bags. I tried to explain to her that I just gave up and something was being lost in translation. I started to put the produce into the fridge, and lo and behold, the second bag didn't have cherries in it at all. Instead, it was filled with Turkish Apricots that the guy outside accidentally put in my basket! No wonder the guy thought I was such a douche for wanting ONLY half a kilo of cherries! Next time I'll be sure to actually look inside the bags! 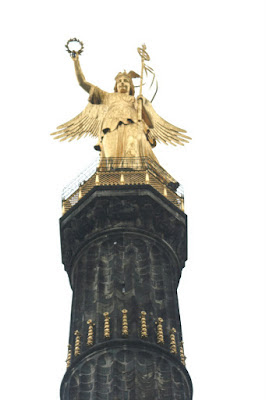 Holy Fuck. The brunches here are Ah - Mazing! I guess it's a Berlin (German?) tradition to have brunch on Sunday. We had one last week, and one today. These things are all you can eat, and are filled with fine cheeses, meats, various breakfast dishes such as scrambled eggs (but good ones with great spices and cheese and real eggs, not the shitty kind you would get in a crappy American cafeteria that is made from a toxic powder and water. Oh yeah, and they call scrambled eggs "omelets". What's up with that?). Belgian waffles with fresh fruits and jams and syrup and real butter.

The place we went to today was an Italian resturant in Prenzlaurer Berg called Belluro. They had this bowtie pasta cooked to perfection with bits of what I was pretty sure was some kind of crayfish. Not shrimp, for sure, but some kind of crustacean that was similar to crayfish. Tiramisu that was simply heavenly. Pretty damn go 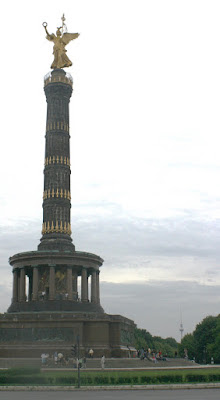 Anyway, we made our way to Tiergarten this afternoon and checked out the Berlin Siegessäule, or Victory Column. It was kind of late this evening, so things were slow and there weren't too many people (and the weather sort of sucked; grey and had rained earlier). But here are some pics.

In thie pic on the left you can see the famous Berlin TV tower in the lower right, a major landmark in East Berlin and remnant of the Communist past. An interesting dichotomy.
Posted by Afferent Input at 1:08 PM No comments:

Research in Bird Brains Uncovers Cure for All Human Suffering

Well, not exactly. But it is an interesting step in understanding the underlying molecular mechanisms that mediate neurodegneration of brain circuits due to the withdrawal of circulating hormones. From the press release:

Neurons in brains of one songbird species equipped with a built-in suicide program that kicks in at the end of the breeding season have been kept alive for seven days in live birds by researchers trying to understand the role that steroid hormones play in the growth and maintenance of the neural song system.

It is the first time scientists have shown that inhibiting an enzyme involved in programmed cell death can protect a brain region in a living animal from neurodegeneration following the withdrawal of steroids.

In addition, the University of Washington research being published in tomorrow's edition of the Journal of Neuroscience reports that the infusion of this enzyme inhibitor into one brain region also kept another connected brain structure from degenerating.

The research has potential to help scientists develop clinical strategies for treating strokes and such human age-related degenerative diseases as Alzheimer's, Parkinson's and dementia, all of which may involve the death of brain cells.

Previous work by the co-authors Christopher Thompson and Eliot Brenowitz showed that neurons in a brain region called the HVC begin regressing within 12 hours after the withdrawal of the steroid hormone testosterone, followed soon thereafter by cell death. The new study indicates that enzymes called caspases, which play a key role in a cell suicide process called apoptosis, are involved in this process of neurodegeneration and that inactivation of caspases protects brain cells for at least a week.

Thompson, who just earned his doctorate in neurobiology and behavior at the UW and is now a postdoctoral researcher at the Freie Univeristät in Berlin, and Brenowitz, a UW professor of psychology and biology, study the brain regions controlling the singing behavior of a white-crowned sparrows.

This work was also featured in "This Week in The Journal" in the Journal of Neuroscience. Yay me again.

From an email I sent to a friend, which I figured might be funny to others:

This morning, I was doing my hausufgabe on the train (which sort of makes it zeugaufgabe). I had to read two paragraphs, one about Heidi Klum, the other about Arnold Schwarzenegger, and then fill in the blanks of sentences below. For example: "blank" ist eine Model. Really hard stuff.

A girl, who was apparently a student from Humboldt University, sat next to me and worked on some of her homework. Hers was a little more complicated; it looked to be some kind of advanced calculus. The really sad thing was that I think I was having a harder time with my homework than she was with hers. I'm such a loser.

Posted by Afferent Input at 8:01 AM 3 comments:

Since I arrived in Berlin 1 week ago, I have had nothing but coffee and beer, both of which are delicious beyond belief. I had better coffee at the Deutsche Bank when we were opening up our bank account than any F-ing Starbucks I have ever been too. Ever.

Incidentally, the color of my pee has turned from clear, to yellow, to this weird orange-ish brown-ish color. I'm pretty sure I should be drinking more water.

Anyway, enough about my excrement. I've been too busy adjusting to the time change, getting my visa stuff in order, going to language classes, working on papers from my thesis, and fighting a stomach bug to post anything. But if you're interested in following the in-and-outs of how the Afferent Input family is adjusting to life in Germany, I encourage you to check out Mrs. Afferent Input's blog 50% of my DNA. Lot's of funny details, including pics of Dr. AI and baby AI.

More soon later this week.
Posted by Afferent Input at 11:18 AM 4 comments: