For Whom does the Bailout Bail Out?

Both the Senate and the House have passed the big $700 billion bailout (actually now larded up to $800+ billion) to save the “financial system” from complete collapse. This is to supplement the various actions taken by the Fed and the SEC to shore up financial institutions, including halting short selling of hundreds of corporations and the creation of an alphabet soup of lending windows to “provide liquidity” to troubled institutions.

Much has been made of the fact that if nothing is done, the markets could come crashing down. Having watched some of the House floor debate this evening in my Berlin apartment thanks to the wonders of live-streaming from C-SPAN via the intertubes, I heard this argument over and over again from many members of the House. The big drop on Monday was cited as an example many times as a sign of impending doom if nothing is done. Of course, all of this is especially ironic given that the markets took a huge nosedive as soon as the House passed the bill.

Anyway, there is no doubt that a 1929-style crash would have an incredible impact upon the economy. But for whom in our society would a market crash have the most direct impact upon?

I found the answer to this question via the Economic Policy Institute in their report titled The State of Working America 2006/2007. They have a table which lists the concentration of stock ownership by income level from the year 2004, which I found particularly interesting. I decided to make a figure that illustrates some of the data from this table: 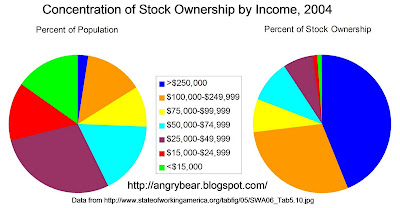 To reiterate, many in Congress who supported the bailout package admitted that this needed to be passed in order to prevent a crash on Wall St. My guess is that allowing corporations to offload toxic assets onto the backs of taxpayers will certainly ease the strain on those corporations balance sheets. But do keep in mind, going forward, just who among stands to benefit the most in this "transaction".
Posted by Afferent Input at 3:34 PM 7 comments: