Scott Horton for all things Siegelman

I followed my own link to Scott Horton's post on the Siegelman case and decided to look at the rest of his blog. Needless to say, he's obviously the go-to guy for all things Siegelman. Lot's of background and lot's of info.

I'll be reading him regularly so that I can follow this case. If this case has sparked your interest. I encourage you to do the same.
Posted by Afferent Input at 10:02 AM 1 comment:

I’m in WA state, so lets just say that politics doesn’t rank very prominently on my radar screen. But I think that has changed in recent days.

Given I spend far too much time reading news and blogs, I’ve seen the case of former Gov. Don Siegelman mentioned a few times. Siegelman, a Democrat, served as Governor of Alabama from 1998-2002. He narrowly lost in the 2002 election after the Justice Dept hounded him with an investigation into supposed dubious dealings. He was indicted and the case was thrown out of court by the presiding judge on the very first day. He decided to run again in 2006. The Justice Dept started to hound him in an entirely different investigation. DDay at Digby’s place sums up the case:

The nub of the case is that Siegelman allowed HealthSouth CEO Richard Scrushy to remain on an oversight board on which he had already served, and in return Scrushy gave money to a noble effort to improve education in the state of , an effort Siegelman approved of. That's literally the reason that Siegelman is in a jail cell right now. This is the kind of thing that, were it actually considered bribery, would put every politician in in jail. The case hung on evidence that Siegelman walked out of a meeting with Scrushy with the check, a baseless lie spouted by a convicted criminal on Siegelman's staff, and the Justice Department KNEW it was a lie and yet continued the case. 60 Minutes tried to talk with the accuser, a man named Nick Bailey, but the DoJ refused to authorize the interview (he's in a federal prison).

The prosecutors nabbed him and then told him he could get a light sentence if he worked with them to nail Siegelman, their real target. This very process is a perversion of the justice system, which as former U.S. Attorney Jones very properly says, requires that prosecutors investigate crimes and not people. But it gets still worse. Bailey testifies that he saw a check change hands at a meeting at which Scrushy’s appointment to the oversight board was decided. This is the evidence that landed Siegelman in prison. And it was false. And the prosecutors knew that it was false.

I never really knew many of these details until 60 minutes ran a piece last Sunday on the case. They interviewed former AG of Arizona Grant Woods, a life-long Republican, Co-Chair of the McCain for President leadership committee, and god-father to one of McCain’s kids. He’s a made man, IOW. He had this to say about the case:

“I personally believe that what happened here is that they targeted Don Siegelman because they could not beat him fair and square. This was a Republican state and he was the one Democrat they could never get rid of.”

Why did this case all of a sudden spark my interest? Well, it started when the Huntsville CBS affiliate went dark for 12 of the 13 minutes the Siegalman piece ran on Sunday:

[J]ust before the segment was to start, people in the northern part of the state who were tuned in to WHNT-TV, Channel 19 in , found this on their screen instead:

We apologize that you missed the first segment of 60 Minutes tonight featuring ‘The Prosecution of Don Siegelman.’ It was a technical problem with CBS out of .

A problem out of NY? Then why was only the affiliate affected? Scott Horton of Harper’s contacted CBS:

“There is no delicate way to put this: the WHNT claim is not true. There were no transmission difficulties. The problems were peculiar to Channel 19, which had the signal and had functioning transmitters.” I was told that the decision to blacken screens across “could only have been an editorial call.”

So it wasn’t NY, it was AL. So what really happened? Given that their initial explanation, the one the broadcasted to their viewers, was BS, WHNT changed their story:

The station later denied that it was an editorial decision, but it also changed its explanation. It was the receiver of the signal in , not the feed from CBS, that caused the blackout, the station said in a statement.

“We can assure you there was no intent whatsoever to keep anyone from seeing the broadcast,” Stan Pylant, WHNT’s president, told The Huntsville Times.

Word is that the station was bombarded with angry viewers that don’t really appreciate media blackouts like those seen in fascist dictatorships. So WHNT ran the segment at that night. Opposite the Oscars.

If there was more to this than simple technical error, what would motivate the WHNT to tamper with the dissemination of the free press? As always, follow the money. From Blue Girl, Red Sate:

WHNT is owned by Local TV LLC, and the CEO is a man named Bobby Lawrence.

Now, why is that relevant? Let's have a look at what Robert Lawrence has given to politicans:

So the CEO of the company that owns WHNT is a big-time donor to Republicans, and his station goes black when it runs a story about corruption carried out by the Republican Party?

So the station is owned by a Republican who gives handsomely to GOP politicians and campaigns. Big surprise.

This case already stunk to high heaven. No were have media moguls blocking the free press using methods worthy of the former .

I wasn’t paying attention to this case before. I am now. Thanks WHNT for pissing me off.

Posted by Afferent Input at 9:40 AM No comments:

Russert: what a waste of journalistic space

I didn't see the debate last night from the fine "journalists" from NBC. But I've seen the whole Farahkhan exchange between Russert and Obama. Classic Russert; he wanted Obama to denounce Farahkhan's comments about Jews, and he did. Then Russert went into the whole crazy train of logic and asked if Obama "rejects" Farahkhan. What the hell does "denounce" mean?

Russert does this just to make news. He doesn't give a rat's ass about substance. Instead, his entire MO is gotcha. Yglesias covered this really well for the Washington Monthly a few months back. A snipet:

Actually, the balls Russert favors may be hard, but the pitches he throws aren't curveballs, which go someplace useful. They're sillyballs, which go somewhere pointless. Russert has created a strike zone of his own where toughness meets irrelevance. John McCain entered the zone last May, when he went on the show and repeatedly asserted that the Bush tax cuts had increased the federal government's revenue. Hearing this, a tough but conscientious journalist might have pointed out that this is demonstrably false. Russert, however, reached for a trusty hardball and sent it sailing. McCain, he pointed out, was now supporting extending the very same Bush tax cuts that he had once opposed.

Well, yes, but this was a bit like asking someone who says the world is flat why he used to say the earth was round. The contradiction Russert pointed out was real—but hardly central. In fact, if tax cuts actually had increased revenues, then McCain's change of heart would have been perfectly logical. The real problem was that McCain's theory of the relationship between tax rates and revenue wasn't true. In Russertland, though, as long as you acknowledge the contradiction, the questioner is satisfied. "You say the world is flat, but just three years ago you said it was round." "You know, Tim, yes, I used to say the world was round, but times change, and that's why I support the Bush administration's bill to construct a restraining wall to prevent ships from sailing over the edge of the sea." And so on.

The whole thing is worth a read.

Digby asks what we can do about Russert. If I feel more inspired later today than I am at 7:30 in the morning, I try to discus this later.
Posted by Afferent Input at 7:22 AM 1 comment:

As much as it would be nice to ignore Goldberg's stupid thesis, that is probably the worst response the left could embrace. Liberal Fascism is a lot like creationism: selective use of facts, quoting out of context, the supposed "oppression" from the intellectual elite. Most scientists think that the best response to creationism is to just ignore it. Yet it continues to fester. Right now, creationists are pushing change public school curricula standards in FL and TX to include creationist and/or anti-evolution view points.

Like creationism, there has to be some pushback against all forms of well-funded and highly orchestrated movements to propel ignorance into the mainstream. Goldberg's book hit #3 on the NYT best seller list. We can try to ignore, but unfortunately not enough of America will to make it a viable strategy. Helpful reviews like Michael Tomasky's and the work done at Orcinus that place well-deserved ridicule on Liberal Fascism are necessary, unfortunately.

Debt as Percent of GDP

Inspired by this post at Angry Bear (ht Atrios), I noticed a striking pattern and decided to dig a little further into the data taken from the Economic Report of the President, table B-79. Over the last 30 years, when there has been a Republican occupying the office of the President, the national debt as a percentage of GDP has soared. You can see that it increased from about 35% at the beginning of the Reagan Admin to almost 70% by the time Bush Sr. was booted from office. 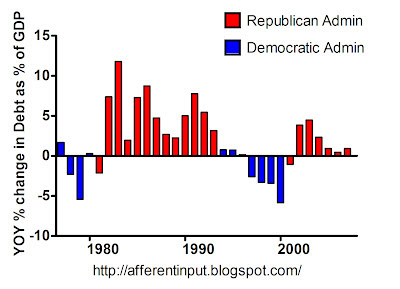 You can see that the debt:GDP ratio improved (ie became smaller) YOY under the Carter administration. This is especially surprising, because the US economy was in a recession and I imagine GDP growth was relatively stagnant. After all, this ratio could improve if GDP grew faster than the debt. Since a recession is, by definition, weak GDP growth, then that means there was no significant growth in national debt during Carters tenure.

Reagan/Bush Sr, in contrast, pushed the debt:GDP ratio to astronomical heights. No doubt this was a combination of increased military spending and decreased revenue due to massive tax cuts.

Clinton improved the debt:GDP situation somewhat, and in fact the debt:GDP ratios were most negative in 2000 Clinton's last year in office.

Bush, Jr has adopted his father's "charge it and forget it" ways and has pushed the debt:GDP back into record territory. Again, a nasty combination of tax cuts and rampant military spending.

Despite their claims, Republicans can hardly be called the party of fiscal responsibility...
Posted by Afferent Input at 1:42 PM 9 comments:

So who has benefited most from the global oil economy and $100/barrel oil? Mish drops some hints here. Be sure to keep scrolling down to see the car made of pure silver.

Remember, Dubai is now the home of Haliburton. They abandoned the US of A for an Arab dictatorship swimming in money. And this is the same company Cheney was CEO of just before becoming Vice President of the United States of America.
Posted by Afferent Input at 11:00 AM No comments: