Current iteration of the bailout bill goes down in flames 205-228.

Ugh-lee.
Posted by Afferent Input at 12:27 PM No comments:

Mrs. AI has the details.

They'll probably blow it in the end, however. They always do.
Posted by Afferent Input at 12:01 PM No comments:

Some Thoughts on Bailouts

First, there was the shotgun marriage of Bear Stearns and JPM. Then $85 billion to AIG. Next came the loans to shore up money markets. Finally Friday’s announcement of a special program (most of the important details still unknown) that will cost “hundreds of billions of dollars”.

And of course don’t forget the alphabet soup of special facilities created by the Fed to protect the big money movers.

Bailouts, all. A lot has already been said, of course. But there are two things that I wanted to add to the conversation.

First, folks on the left and the right have referred to the recent onslaught of government bailouts as “socialism”. On the surface, it may seem that way, given that government now “controls” vast swaths of the nation’s financial system. But nothing could be further from the truth.

Let me say it more plainly; this is not socialism. Socialism is a form of government that seeks to equalize the playing field for all, insuring that that the fruits of labor are shared equally (but not fairly, necessarily. That’s one of the major reasons why socialism doesn’t work). Does anyone seriously think that captains of finance have embraced the philosophy of “workers of the world, unite!”? The same guys with multi-million dollar “golden-parachutes”, sometimes taking home more than a billion dollars in a year. The same guys who have embraced shady accounting practices so that they and their companies pay as little in taxes as possible, sometimes percentages of income far less than the average American worker. The same guys who have broken union after union over the decades. We’re supposed to believe that just this week this crew has decided to abandon Friedman and embrace Marx with open arms? Come on…

Let’s look at it another way; does anyone seriously believe that the average American stands to benefit financially from the actions taken this week? That the profits of AIG, or BS, or Fannie and Freddie will be split equally amongst the masses? Of course not. Instead, tax payer money will flow from the Treasury to shore up the accounts of what should be insolvent corporations. Essentially out of your pocket and into the hands of Wall St, only making a quick pit stop in DC. Or worse, putting it on the national credit card by selling even more treasuries. This is not socialism. Instead, this more resembles a different form of societal structure: kleptocracy.

Second, how did we get to the point that simply the failure of one company would mean utter chaos for society at large? This fact alone illustrates very nicley that the financial system ceased to be a free market long before last week. The lifeblood of free markets is competition. Competition gives birth to fair pricing of goods and services as well as efficiency of commerce. If one business fails, another takes its place.

The fact that these corporations were to big to fail means they were too big. Period. If AIG couldn’t hack it, then some other corporation would have stepped up to the plate. That is if the market place was truly free. But clearly it was not. Instead, what existed was at the very least a pseudo-monopoly. Many markets left to themselves will gradually evolve into monopolies, and one of the roles government needs to play is to insure that monopolies don’t get to the point where they distort free markets to the point where they aren’t really free anymore. Obviously government failed to meet that obligation in the financial sector the last few years.

I suppose that’s what happens when the foxes are put in charge of the hen house. Only time will tell if the foxes can keep fooling everyone into believing that there are still some hens left.

Note: It should go without saying that the above is my opinion and my opinion alone. No doubt that many of the other Angry Bears would disagree with at least some parts, if not the whole. But I'll say it anyway.
Posted by Afferent Input at 6:48 AM 3 comments:

As the world financial markets head into complete meltdown, it is worth taking a moment to look back to see where all this began. Much of the current crisis stems from the shadow banking system’s dependence upon the explosive growth in derivatives market. These complex financial instruments are meant to monetize risk of default. Futures contracts, options, swaps, and many others allow one party to insure money is exchanged, but the outcome of the contract depend upon many underlying factors that make up the terms of the contract. Though many forms of derivatives are traded in exchanges, many are not necessarily.

Derivatives that not necessarily traded on market floors are known as “over-the-counter” derivatives. They are usually bilateral contracts between investment banks and a customer and can be generated simply over the phone or over the internet. This form of contracting is largely unregulated. The OTC market has been monitored by the Bank for International Settlements since at 1998, and they publish detailed information on various forms of OTC derivatives every six months. The most recent data can be found here.

This market was very big in 1998, but it has exploded since then. I’ve generated a figure of the amounts outstanding of OTC derivatives since 1998 broken down into their various types. 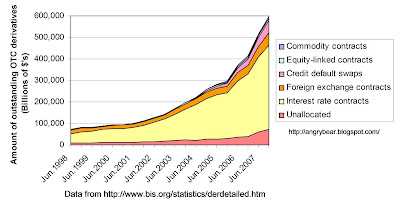 You should note that the Y-axis is in billions of dollars. Yes, billions. That means, as of Dec 2007 (for which BIS has the most recent data), the total OTC derivative market was almost $600 trillion dollars. In 10 years, it has gown 826%. 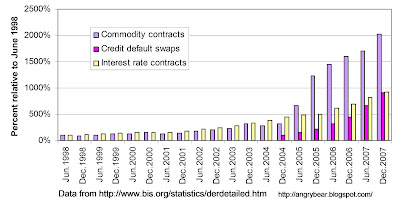 Though commodity contracts still make up only a small proportion of the total OTC contracts outstanding (1.5%), its growth has been astronomical, increasing over 2,000% since June of 1998. Even interest rate contracts, which make up the largest portion (66%) of all OTC derivatives, increased over 900% in 10 years. And most troubling of all is the credit default swap market. These are contracts that are activated in the event of a default.
This market has increased 905% in just three and a half years since BIS starting monitoring this form of derivative. It was a mere $6.4 trillion in Dec 2004; In Dec of 2007 this market ballooned to $57.9 trillion. Just think of the unwinding of credit default swaps that is involved when big investment banks like Lehman Bros. go under.

Of course, all of it is very complicated, because derivatives are essentially a “zero-sum” instrument. They way derivatives are supposed to function is that money is exchanged depending on the outcome. Nothing is lost, at least in an ideal environment; it is only exchanged hands. But what happens when one party of the contract can’t pay?

I think we’re going to see that many times over very soon…
Posted by Afferent Input at 7:46 AM 3 comments:

WTF is up with this costume?

Don't get me wrong; the kid is cute enough. I just don't what's up with the two headed Curious George. I say again, WTF?
Posted by Afferent Input at 11:26 AM No comments:

Reading through what's been released I still don't really get a sense of the important details. "Who eats how much shit" is the big question and it isn't entirely clear.

As the old saying goes, if you're sitting at a table, and you don't know who gets to eat how much shit, guess who gets to eat the most.
Posted by Afferent Input at 10:07 AM 1 comment: