Yes, I am truly trying to wring as much as I can from the CBO data; today is no exception. I have a new figure that also shows some very interesting patterns, but really isn't much of a surprise if you have already read my other posts on this topic.

I showed in a previous post that the rate of change is very unequal across groups. Things have been very, very good for the Top 1% in this country; for everyone else, less so. This new figure illustrates that point in a new way.

This figure shows the total after-tax income earned by each category since 1979: 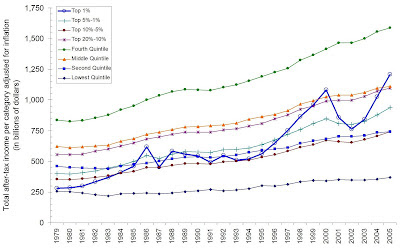 I've bolded the line for the Top 1% because that category shows the most interesting pattern. In 1979, the Top 1% earned just a little bit more than the bottom 20%. Remember, the Top 1% is only 1% of the population, whereas the lowest quintile is 20%. In reality, the top 1% earned more than 20 times the average income of the lowest quintile in 1979. But here I am treating all the categories the same, ignoring the fact that the various categories actually represent differing numbers of people.

Anyway, in 1979 the Top 1% earned only 282 billion dollars, and only ranked seventh out of the eight categories. Since then, their total income growth has skyrocketed. They are now in second place, earning over 1.2 trillion dollars. The Top 1% now earns more than the bottom 40% combined (1.1 trillion).

Ironically, though it looks like the Top 1% is on it's way to take over the Fourth Quintile for the top spot given the category's exponential growth, I don't expect that to be the case, at least for 2007. The credit crisis will lead to massive losses on Wall St (it already has), and given that huge portion of the Top 1% are in finance (they're not all Google billionaires) I expect that we will see a significant crash in their income for 2007 and probably 2008. The current fiscal crisis is bigger than anything we have seen for a long, long time, and the fallout for the Top 1% will be significant.

Of course, that doesn't mean peaches and cream for the rest of us either. A recession hurts everyone, and 2008 will be no different.
Posted by Afferent Input at 3:15 PM

I only just linked to your blog for the first time this week and am bowled over by your graphs.

Is it possible to construct a graph that illustrates the disposable income left after taxes, rent, utilities, food and transportation?

I only just linked to your blog for the first time this week and am bowled over by your graphs.

Is it possible to construct a graph that illustrates the disposable income left after taxes, rent, utilities, food and transportation?

Sorry for the double post. This is my first comment on blogger in two years (since Google acquired it?), and I never saw the 1st post (only a preview and a rejection) until after I tried again.

Thanks for the comment. I'm just starting to dig around these kinds of data, so be sure to stop by for updates. Income inequality is an issue that I am especially interested in, and I plan on blogging more about it.

I'll dig around to see if I can find anything on disposable income after living expenses.

my compliments, afferent input. I have been interested in this kind of data and been going through the CBO and IRS data for a while but did not see such tables.

I think that now in pre-election period such data should be posted all over the place, so the people can be informed and make the right choices.

while I am a bit libertarian/supply side leaning I do believe the rise in inequality of income distribution has gotten too far.

I do like however to note that the top 1% are going much closer with the S&P 500 ( they are taking more risks - true that they can very well afford it better than the rest of us). while I don't want them to hurt more ( they probably will not afterall :lol: ) as they are probably the most inovative and productive of us, I would like them to be somewhere in the middle of that graph.

and don't forget that despite the tax breaks that favoured them more than the rest of us they are paying in absolute terms more taxes than all the other groups.

Well done Afferent Input. I found one of your graphs on dailykos which referred to a posting on Blue Hampshire which referenced your post as well.

I did some looking around and found some of your other posts and felt compelled to write about them here.

I'll keep an eye out for new posts. And thanks for taking the time to crunch the numbers and put up some "plain english" posts. You have a talent for it.

I appreciate your work on this data. It is so important for citizens to understand our financial system, as you cannot prosper if you are ignorant.

I think that income inequality is critical for a healthy economy.

Not everyone wants to earn a ton of money or be caught up in modern society. Others just don't want to work that hard, or take the necessary risks to prosper.

If we use draconian tax policies to punish success, you will hinder progress pure and simple. Just look at what the luxury tax did to the US Yachting industry in 1991. The "luxury" tax resulted in a drop in sales 77%, 25,000 layoffs, a net tax loss in the first year of $97 million. Bottom line is rich people aren't stupid about their money.