Why YOY doesn't tell you the whole story

Reports on housing tend to use YOY (year over year) as way to assess change in the market. They do this because housing is a seasonal industry. Sales are higher in the spring and summer months and tail off in the fall and winter months. When it comes to reporting statistics like pending sales and number of sales, you have to make a YOY correction. These particular statistics vary enormously from month to month in a very circannual pattern. Thus YOY.

But when it comes to sales price, I am not convinced that there really is a seasonal pattern, or at least one that is that significant. This is especially true in Seattle, where prices have steadily increased without any seasonal pattern for the last few years. You can see that in the figure below. This is nominal price for single family homes (SFH) normalized to the price for SFH in January 2002. Thus, the value for January 2002 is 1.0 and it goes up from there. Red is King county, where Seattle is located. Black is Snohomish County, just north of Seattle. Blue is Pierce county, which is south of Seattle. 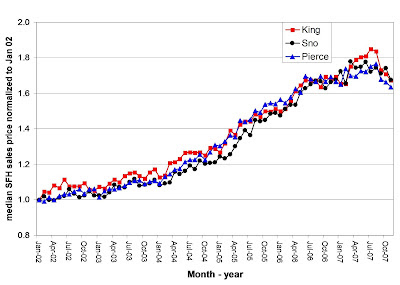 click on image for larger version
The latest data for the Puget Sound area on housing from NWMLS are out. Being real estate professionals, they obviously have put the sunniest spin on the latest numbers. They do this every month; it's their job. But it's getting harder lately, because the housing bust that has affected so many markets nation wide is starting to be seen in a big way in the Seattle area.

But here's their take:

A "typical holiday market," "the start of an optimum buy zone," "a good time to beat the spring rush," and a "wonderful time to be a home buyer" are among reactions by directors of Northwest Multiple Listing Service upon viewing the activity summary for November...

The latest recap report issued by Northwest MLS shows little price fluctuation from a year ago, ample inventory, [and] the expected seasonal slowdown of sales activity...

"We're slowly beginning to rebound from the effects of the turbulent mortgage market," Scott said. [edit: must mean we've hit bottom if things are rebounding, right?]...

Emphasis mine. Notice the emphasis on YOY changes. "Sure there are some declines here and there, but that is typical! After all SFH for King Co was unchanged. And this is a typical holiday market where things slow down and prices decrease.

But is this typical? Part of the problem is that they're emphasizing changes in price YOY. This misses the fact that the median price for SFH peaked in July of this year.

This figure illustrates what I mean: 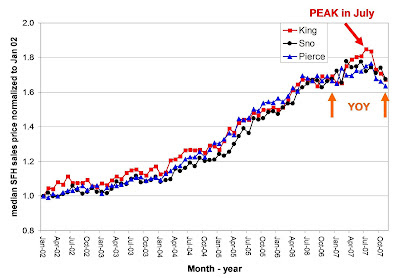 Median prices SFH in King Co are actually -10.57% lower than they where in July of this year! Ouch! But maybe it has something weird to do with the scale. Perhaps we really are having a plain old normal holiday slump where the median price decreases from summer to winter. So I decided to look back over the past few years and look at the percent difference between July and November within each year. If the value is positive, it means price increased from July to Nov. If it's negative, price decreased. So what do we see? 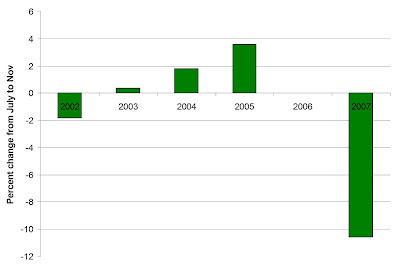 Prices actually decreased about 1.5% in 2002 from July to Nov. We were coming out of a tech bubble bust that actually hit the area pretty hard. But in 2003, 2004, and 2005, prices actually increased. In fact, in 2005 prices increased a whopping 3.6% from July to Nov, just 5 months! In 2006, prices were unchanged (perhaps the beginning of the end?) This year things are VERY different. Prices have dropped -10.57% in just five months. I would say there's nothing "typical" about what we saw in Nov, turkey or no turkey.
Posted by Afferent Input at 4:17 PM

good observation. 2008 should be really fun to watch from the sidelines.

I gotta agree. The RE industry and their enablers in the media have puffed up the Seattle market for far too long.

I don't expect a crash like Las Vegas or Miami, but there will be one. Seattle ain't that special...