Inspired by two posts at The Big Picture, I decided to look a little more closely at the BS being flung around yesterday regarding the release of existing home sales data for Feb 2008. It was disgusting, to say the least. All the major media outlets were pushing hard on the fact that the seasonally adjusted annual rate (SAAR) was up a whopping 3% from January.

Now, there is some confusion about this increase. It's true that existing home sales increase every single February when compared to the month before. That's because fewer people buy homes in the dead of winter. Most people are up in arms because it sounds like the media is spinning that an increase in home sales occurs every year, and that this increase isn't any different from any other year. What people are missing, though, is that this an increase in the annual rate of sales. Basically, if sales stay at this pace, then 3% more homes will be sold this year than if home sales stayed at the rate at which they were selling in Jan 08. Here is a figure that illustrates the MOM changes in SAAR for existing home sales since Feb 2007: 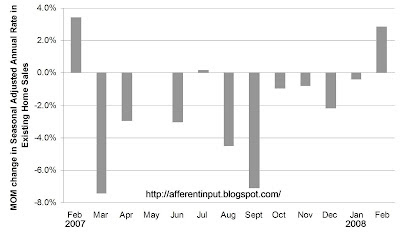 You can see that, except for Feb 07, MOM change in existing home sales was basically very negative the whole year. This is because SAAR is essentially an estimate of how many homes will sell in a given year, and that estimate had to be downwardly revised as the market tanked. In addition, looking at MOM change in SAAR is essentially one way of assessing the instantaneous rate of change (if you consider a month to be instantaneous) of the estimate of how many homes will be sold in a year. Last year, the existing home market steadily declined. Thus, the MOM in SAAR was negative for basically the whole year. The fact that it's positive right now means that downward trend in the market has taken a breather. For now. You can see that here: 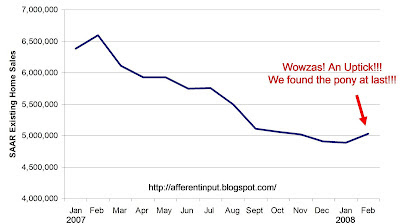 That little uptick is why the media was sooooooo excited yesterday. The market still sucks, and the SAAR is off -24% from where it was last year. But it sucks just a little less than it did yesterday. whoo F-ing hoo.

Barry asks about how they accounted for the leap year:

February 2009 was a leap year -- the month had an extra day, and without that I sincerely doubt we would have seen any gain (I wonder how they adjusted for that).

Me too. I'm going to look into it. Maybe they made a "mistake". One day of extra selling doesn't sound like a big deal, but one day is about 3% of a month. It would be some crazy shit if the whole media frenzy yesterday was all because there was one more day in Feb 2008 than Feb 2007.
Posted by Afferent Input at 11:59 AM